History has brought us back
(Die Geschichte hat uns wieder)

by and with Kathleen Morgeneyer and Sabine Rennefanz
Reading followed by table discussions
"I often talk in my mind with my stepfather and with my brother, I do not talk with them, not in reality.  In reality I have heart palpitations and heart cramps when I start talking to them about it. And even talking feels bad, as if talking is also an act of violence." Kathleen Morgeneyer

"A conversation between us is like walking over landmines. Ready for explosion at any time. Are we, who have gone away, the traitors? Sabine Rennefanz

Thirty years after the fall of the Wall, the trenches are deeper than before: between East and West, East and East, above and below, right and left, fathers and daughters, mothers and sons. The actress Kathleen Morgeneyer and the writer Sabine Rennefanz trace the East German ruptures of the past decades and investigate the speechlessness that reigns between the generations: it's about the turning point, complicated families, old and new rage.

At the end of the reading, we invite the audience to exchange memories and family stories about new developments, changes and new beginnings.
And the question: What will happen now - 30 years after 1989?
Director Birgit Lengers, Anika Steinhoff
Premiere
25 August 2019
Saal 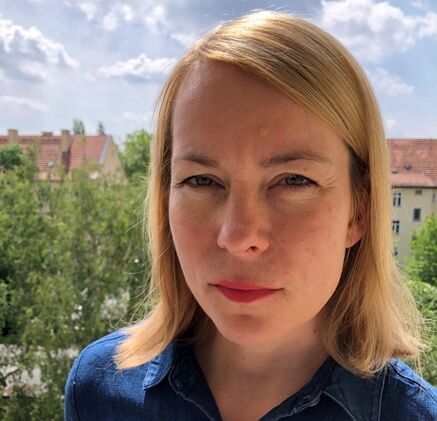