Representation of a fake sermon on dying

by Boris Nikitin and Malte Scholz
A gospel choir on a stage. And two more people. One seems familiar to me, have I not seen his photo on the theatre website? An actor. But is he really acting here? And the other one? A preacher? Is this documentary theatre? No. Or rather yes? What is this? A kind of worship service? The gathering of an evangelical sect? Just theatre fiction? Boris Nikitin's theatre productions go to the edges of theatre – and sometimes even beyond them. He explores the boundary between (supposed) reality and fiction, the document and its falsification, and preferably blasts these categories altogether. The theatre nights that emerge from this are often raw, coarse-grained, frontal, direct.
They play with rhetoric, propagandistic forms, are unruly. But all of the sudden they touch. Catch you emotionally. Suddenly, a thoroughly "true" moment arises. But then it is already being questioned again. What kind of reality is represented here – or rather made? The categories blur. And precisely because Boris Nikitin's works call into question just about everything, they are among the most seductive experiences in theatre.

"Only where I can die – where I can live, because I no longer have to live – that's where the political sphere begins." This is how Boris Nikitin drafts one of the thoughts that are crucial for the conception of the Representation of a fake sermon on dying. In probably the greatest possible self-empowerment, the acceptance of the inevitable end, lies a resolute and decisive beginning. Maybe only with the conscious use of one's own vulnerability, sovereign decisions are possible. What a beautiful and actually simple thought that the English language puts in a nutshell with the word "vulnerability", since it involves "ability". What is this ability to make oneself vulnerable, to endure injury, to affirm it, to draw strength from it? What possibilities, potentials does it release? Can it only get really political here, where the greatest possible determination can arise? Is this only possible at the end or also in the middle of it? And is that a sermon? Propaganda? Or rather theatre?
Director Boris Nikitin
Video Georg Lendorff, Alexander Mrohs
Stage lighting Frank Laubenheimer
Dramaturgy Sascha Kölzow
Guest performance Staatstheater Nürnberg
2 June 2019
Kammerspiele 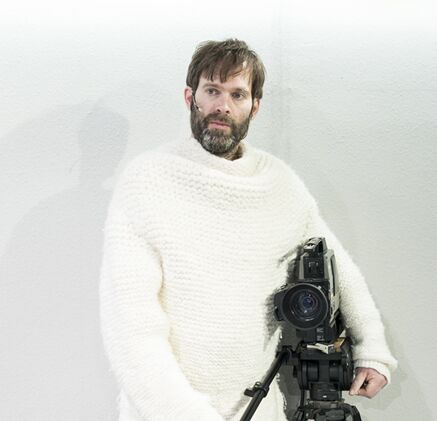