Writing about the unspeakable: What can culture do in the face of barbarism?
Lecture with Ulrich Matthes, Kathleen Morgeneyer and Almut Zilcher; followed by a discussion with Katja Petrowskaja, Tanja Maljartschuk and Denis Trubetskoy, moderated by Tamina Kutscher (dekoder.org)

Writing about the unspeakable

What can culture do in the face of barbarism?
In view of the images from Butscha and Irpin, we are at a loss for words. What language captures the horror of war crimes? How does one write against impotence, against the gradual numbing? "The war is in its fifth week and we are getting used to it, as if the growing number of victims had already become a statistic for future history books", writes Katja Petrovskaya on 3 April. "Our powerlessness is also becoming a habit. The horror of the first days now seems almost cute". Besides the uncertainty of how to speak in the face of Butscha, it is also about the question of who is allowed to speak and what can we believe in times of war, where, as we know, truth is the first to die. "You have to be very careful who you give the floor to now, and look closely at where the aggressor really is and where the victim is. Propaganda will find new slogans every day, new answers, new attacks on Ukraine, because now it's war," says Tanya Maljarchuk, referring also to the Germans, who are called upon to self-critically question their relationship to and dependence on Russia.

STAY UNITED #3 gives the stage to two Ukrainian authors: Katja Petrowskaja, born in Kiev and living in Berlin, has brought people out of the anonymity of the masses in Maybe Esther. It is her own family that she tells about over several generations. Tanya Maljartschuk, born in Ivano-Frankivsk, lives as a journalist and writer in Vienna. In 2018, she was awarded the Ingeborg Bachmann Prize for her story Frogs in the Sea. The text is about the encounter of two lost people, a Ukrainian immigrant and an Austrian woman suffering from dementia, who give each other support.

Ulrich Matthes, Kathleen Morgeneyer and Almut Zilcher will read from their texts. After the reading, Tamina Kutscher, Eastern Europe expert and editor-in-chief of dekoder.org, will talk with the two authors about the responsibility and possibilities of literature in times of war. Joining us from Lviv is political correspondent Denis Trubetskoy. He is a freelance journalist for German-language media in Kyiv and focuses on topics related to Ukraine, Russia, Belarus and the entire post-Soviet space. Among other things, he writes for the blog ukraineverstehen.de.
lecture & discussion
16 April 2022
Deutsches Theater 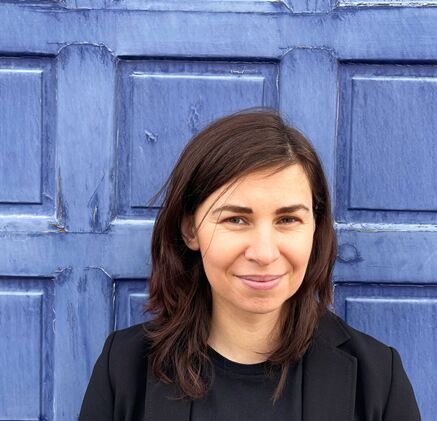