by Christoph Hein
"I’m homesick, but I don’t know what for: maybe for a happier life, for the Promised Land of which the Angel spoke. I’m homesick for a time that’s never existed." A member of the Deutsche Theater’s ensemble cast from 1905 to 1911 and later an honorary member of the DT, Tilla Durieux was one of the greatest, most avant-garde actresses of her time. Her charisma and social life made her a prominent figure in Berlin society. The gutter press had a field day when her second husband Paul Cassirer, a well-known publisher and patron of the arts, shot himself just outside the court room where their divorce was being pronounced. Even afterwards Durieux’s personal life was full of drama. Her third husband Ludwig Katzenellenbogen was Jewish, so the couple went into exile when the Nazis came to power in 1933. After a brief stay in Switzerland they settled in Zagreb, in what was then the Kingdom of Yugoslavia. After the Nazis invaded in 1941, Katzenellenbogen was arrested and later died in a German concentration camp. Tilla Durieux remained in Zagreb until 1955, when she returned to Germany and celebrated her comeback as an actress. In “Tilla”, Christoph Hein lets this extraordinary performer speak for herself: this lonely woman fondly looks back at her life while, at the same time, trying to come to grips with her past and her sense of being a stranger after returning from exile.   Also an honorary member of the Deutsches Theater, veteran actress Inge Keller is as legendary as Durieux was in her time. In 'Tilla', Keller explores her colleague’s life in dramatic fashion, revealing similarities and differences between these two women who’ve lived for the stage.
Director Gabriele Heinz
Set & Costumes Hans-Jürgen Nikulka
Composition Uwe Hilprecht
Choreography Annett Scholwin
Dramaturgy Ulrich Beck
Premiere and dramatic reading November 2, 2012 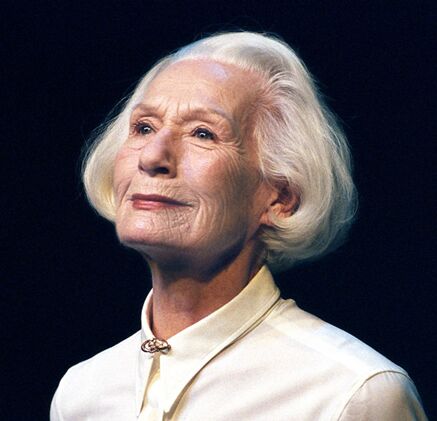